by the sisters, Susan J. Zimmerman and Nancy Jo Mullen.  The sister duo teamed up in 2016 to work
at Tamarind Institute in Albuquerque. Together they created a body of work which reflects their mutual
aesthetic language and techniques.
The title Inviting Joy, stems from their shared interest and long range influence by the post minimalist
painter Agnes Martin, and her notable writings and lectures. Their additional influences are the works of two literary
figures, the poet Emily Dickenson, and the nature writer and activist, Terry Tempest Williams.
Zimmerman and Mullen’s concise, yet lyrical forms come together in a series of monotypes, and various works on paper. They mutually expressed that thier collective undertaking enriched their individual abilities of achieve a rich synchrony, inviting joy.

Nancy Jo Mullen is an artist and printmaker living and working in the Portland, Oregon area. She is an Artist Member of Print Arts Northwest, where she also served
as a board member.

And now on to the latest from our growing roster of awesomely talented members.Mariette Patricia Leis co-curated and is taking part in a show called “Illuminexus” at April Price Projects Gallery in Suite G at the Hyatt Hotel in Albuquerque, NM (through August 31). The show features a diversity of aesthetic sensibilities among the three artists—besides Leis the exhibition includes Edwina Hawley Milner and Mayumi Nishida (also a Vasari21 member)—and explores “a simultaneous common fascination with color and light,” says Leis, whose paintings stem from a residency in Iceland. She adds that her “works find inspiration in the contrast between hours of winter darkness and the splendid display of Aurora Borealis, or Northern Lights.” Below is Ascension 6 (2016), 20 inches in diameter, oil on canvas.
_Ann Landi 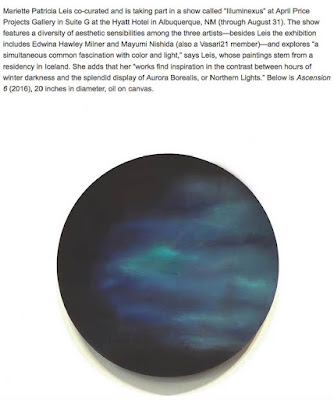 For the full page: from Vasari 21

News: Review by Wesley Pulkka / For The Journal

"The Big Question" by Jon Carver.

ALBUQUERQUE, N.M. — At the end of every episode of “The A-Team,” Hannibal Smith, played by George Peppard, would light his cigar and say, “I love it when a plan comes together.”
I don’t know if gallery owner April Price and artists Jon Carver, Marietta Patricia Leis, Edwina Hawley Milner and Mayumi Nishida lit one up after finishing the installation of “Illuminexus,” a collaborative exhibition, but they certainly earned a good smoke.
The show grew out of a conversation between Leis and Price regarding the possibilities of cross-pollination between Santa Fe and Albuquerque artists. The result is a powerful show with a variety of divergent sensibilities coming together with a surprising coherence of creative intent.
Though wildly different in some respects the four artists complement each other’s work.

“Ascension” by Marietta Patricia Leis.
The largest and most complex piece is “Plenum” a multilayered mobile and true collaboration between longtime New Mexico arts writer and artist Carver and his wife, Nishida. The piece is made up of transparent and translucent circular discs tied together with and hanging from clear nylon fishing line.
Each painstakingly constructed and designed acetate disc – ranging from 6 to 16 inches in diameter – is a unique part of the whole narrative consisting of a range of silk screened and hand-painted images, including cats, birds, furniture, mandalas and small vignette-like scenes from a stage play. The piece has great street cred, with its first 2013 iteration having been shown at Gallery Zone, an artist-run art space in Japan.
Like Dan Aykroyd in “Ghostbusters” who inappropriately thought of the Marshmallow Man at the very wrong moment, my first thought on viewing “Plenum” from a distance was Lawrence Welk’s champagne bubble intro.
It might not have been a bad thought if Welk and his gaggle of songbirds, musicians and accordion players could knock out a credible rendition of Igor Stravinsky’s “Firebird Suite” but they probably could not. So I apologize to “Plenum” and its makers.
In “The Big Question,” Carver has buried words that ask the viewer to consider the nature of life. The high-energy composition is reminiscent of some Hindu stone temples that are so elaborately embellished with carvings that they seem to be melting in the sunlight and come close to turning into pure sound.

“Nocturne in Glass” by Mayumi Nishida.
Nishida offers an inverted silk-and-wood pyramid and several light-catching panels that move and vibrate as the viewer passes by. My favorite among those is “Nocturne in Glass” a deep-blue composition brimming with geometric ghost forms.
Leis, the only Albuquerque artist in the gang, is a perennial minimalist with a penchant for romantic ambiance. While on an artist winter residency in Iceland, she had a love affair with the all-pervasive darkness of winter.
During that winter, Leis produced beautifully dark but not foreboding images titled the “Ascension Series” that exude greenish-blue light from within.
Her paintings’ light comes from deep within the composition as if filtered through the densely poetic atmosphere of an Icelandic winter’s eve.

“Klimpt Collage” by Edwina Hawley Milner.
Without having to lift her brush to canvas, Milner has had an enormous positive impact on the arts of New Mexico through her involvement with the Women in the Arts Museum in Washington, D.C., and her contributing efforts on behalf of the New Mexico chapter of Women in the Arts.
She’s a heck of a painter and collage artist on top of it all. Gustave Klimpt and his unbridled celebration of Art Nouveau aesthetic tenets are an unapologetic inspiration for Milner, who freely applies gold leaf to large abstract compositions that heat up the gallery with bold hot colors and mural scale diptych and triptych formats.
With titles like “Pathway to Paradise,” “Dancing Round-a-bout” and “Passing Crossroads,” Milner is an artist on the move. Her paintings are bold and well-executed.
For a variety of reasons and changes in her life, Milner’s newest series is titled “The Klimpt Collages” from which she selected eight little honeys for this exhibit. My favorite is a young lady in profile surrounded by flower blossoms. Though a collage the piece retains a true painterly look and feeling.
This is a do not miss experience.

Hours: 12:30 to 5:30 Wed. -Sat. or by appointment
Courtesy parking in the Hyatt Garage on Copper St.
april.designstudionm@gmail.com
http://aprilpriceprojectsgallery.blogspot.com
at July 05, 2017 1 comment: 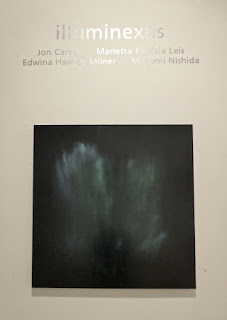 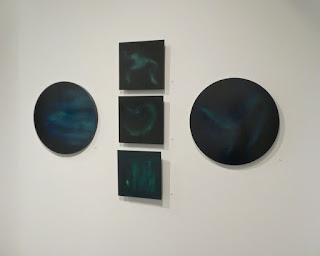 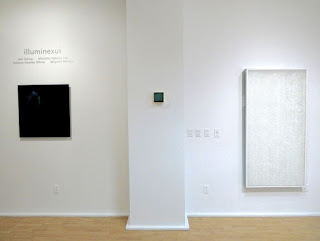 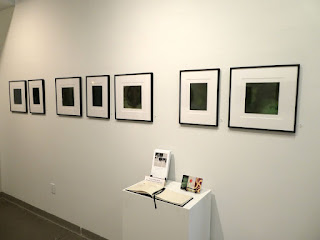 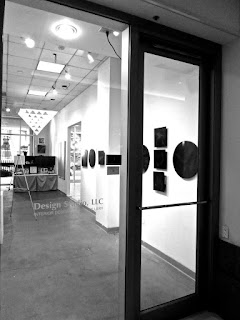 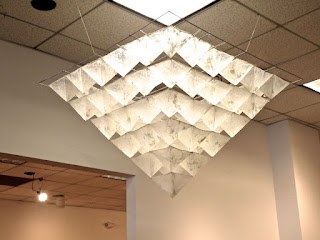 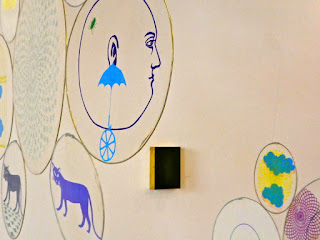 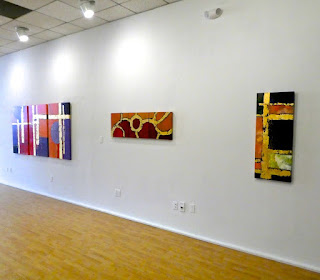 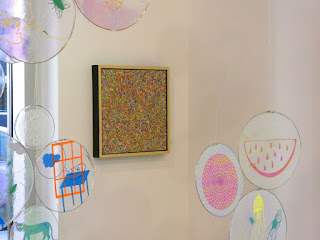 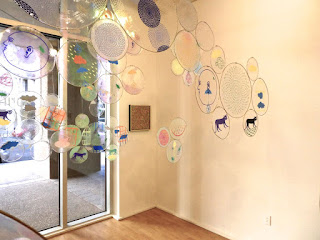 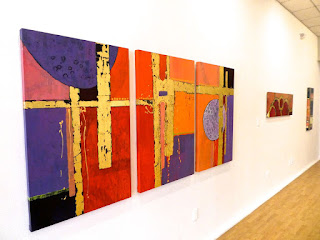 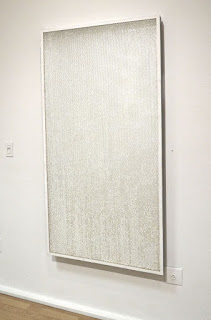 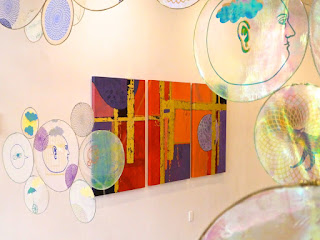 Marietta Patricia Leis will present her series of abstract paintings sourced from her time at the Gullkistan Artist Residency in Iceland. These works find inspiration in the contrast between hours of winter darkness, and the splendid display of Aurora Borealis, or Northern Lights. Leis is a multimedia Albuquerque artist of international repute.

Hours: 12:30 to 5:30 Wed. -Sat. or by appointment
Courtesy parking in the Hyatt Garage on Copper St.
april.designstudionm@gmail.com
http://aprilpriceprojectsgallery.blogspot.com

April Price Projects Gallery is pleased to announce, illuminexus a visual art exhibition of four artists featuring a confluence of diverse aesthetic sensibilities that find commonality in a fascination with light and color.  iIlluminexus transcribes the circle of light that brings us together.
Marietta Patricia Leis will present her series of abstract paintings sourced from her time at the Gullkistan Artist Residency in Iceland. These works find inspiration in the contrast between hours of winter darkness, and the splendid display of Aurora Borealis, or Northern Lights. Leis is a multimedia Albuquerque artist of international repute.

Edwina Hawley Milner applies metal leaf to brilliantly hued paintings, based upon natural forms and organic abstraction. Her work evokes late Byzantine minimalism and the Japanese tradition of kintsugi, in which broken pottery is repaired with gold. Milner lives and works in Santa Fe, NM and was instrumental in founding the NM State Committee of the National Museum of Women in the Arts.
Mayumi Nishida is an installation artist with a particular focus on light, and interactive spaces. In her Inverted Pyramid pieces she employs silk, Japan’s first industrial material, to build light capturing structures that question hierarchy.  Plenum, originally exhibited in Osaka, Japan is an evolving collaboration with her husband, Jon Carver combining silkscreen imagery, iridescent transparency, and optical illusion. The couple lives in Lamy, NM.

April Price Project Gallery is pleased to present The meme Salon, a pop-up gallery expose by artist Mary Ann Strandell that explores the ideas of decentralized “place”.  Strandell considers historic artifacts and Period Rooms, along with real-time landscape renderings into collapsable and transferrable situations that denote place and algorithmic patterns, and vernacular architecture.  The meme Salon expose presents a series of works that combine visual languages of digital media and analogue paintings. Some of these works
specifically imbed large scale images within the hyperspace constructions of 3D Lenticular Print Media. Other works include Strandell’s "Outdoor Studio" work done on site in the canyons of New Mexico.

In celebration of Strandell’s recent acquisition to the permanent collection of NMSU by New Mexico Arts; along with her recent artist-in-residency at The Menaul School, Albuquerque, and with her upcoming inclusion in the international Currents New Media 2017, Sante Fe, (June 9th -25th) we invite you to
join us for a First Friday ARTScrawl, June 2nd, from 5:00 to 8:00pm.

Hours: 12:30 to 5:30 Wed. -Sat. or by appointment
Courtesy parking in the Hyatt Garage on Copper St.
april.designstudionm@gmail.com
http://aprilpriceprojectsgallery.blogspot.com

Gallery News: April Price Projects Gallery is pleased to announce
the recent acquisition of Patterned Algorithm Interior, by Mary Ann Strandell
to the permanent collection of New Mexico State University, Las Cruces.
The purchase was made possible by New Mexico Arts,  a state arts agency
and a division of the Department of Cultural Affairs.


Mary Ann Strandell’s artwork Patterned Algorithm Interior, combines both abstraction
and realism. Her abstract wave patterns are the back-drop for her hand rendered acrylic
painting of the historical Period Room, The Fragonard Room within the Frick Museum
in NY.  This artwork is a continuation of her interest in ideas of decentralized place.  Strandell uses historic image artifacts, along with real-time landscape renderings as collapsable and transferrable situations, through images of nature and architecture. Patterned Algorithm Interior is made from high tech and low tech materials, which include traditional painting, archival printing, three software programs and a 3D lenticular optical lens fabrication.Strandell first began the artwork by painting in nature, from observation, a water-scape in the Rio Grande Gorge  north of Taos, NM.

Design Studio NM LLC & the April Price Project Gallery  Closed Indefinitely We hope that you and your family are safe and sound d...