Side by Side
New works by Lin Johnson and Phil Putnam 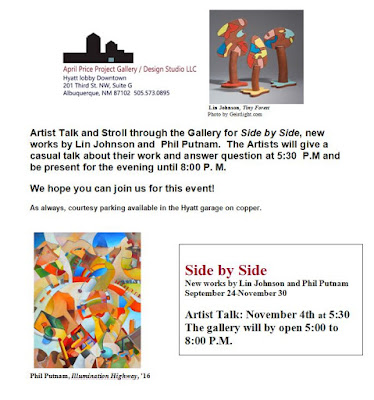 April Price Project Gallery is pleased to announce a new exhibit, Side by Side, featuring the work of two artists:  Lin Johnson and Phil Putnam.  The couple has been working 'side by side' for forty years, developing their vocabulary, personal iconography, and artistic style in different media.

Lin works in clay and focuses on creating small sculptures and vessels, often in series. While drawing from the natural environment, she addresses the relationship between two-dimensional  and three-dimensional forms, a process which involves construction and deconstruction. She has explored and utilized the human face in a playful ways reducing features down to a bare minimum of simple geometric shapes that still evoke  personality.  Often working in pairs, she explores the conversation between objects; as well as the viewer.

Phil's series of drawings and paintings began some time ago as abstractions of the landscape derived partially from commuting between Los Alamos and Albuquerque for many years. Much of his subject matter in the work was inspired by peripheral images constantly entering his field of vision while commuting.  In 2015 he was awarded a Wurlitzer Foundation Grant, giving him uninterrupted time to explore the abstract landscape in painting, while also beginning a series of ethereal drawings inspired by Taos and his studio experience up North.

There is a stylistic dialogue between Lin and Phil which ruminates in their imagery.  The language of their forms converse however the atmospheric constructs of Putnam's expand off the canvas, while Johnson's earthly figurative foms contain an absolute with each work, as well as, in her grouped installation.

Design Studio NM LLC & the April Price Project Gallery  Closed Indefinitely We hope that you and your family are safe and sound d...